Posted by DaveDias in Dave's Updates
Share this
3 likes

We know that the whole creation has been groaning as in the pains of childbirth right up to the present time.  Not only so, but we ourselves, who have the firstfruits of the Spirit, groan inwardly as we wait eagerly for our adoption to sonship, the redemption of our bodies.  For in this hope we were saved. But hope that is seen is no hope at all. Who hopes for what they already have?  But if we hope for what we do not yet have, we wait for it patiently.

In the same way, the Spirit helps us in our weakness. We do not know what we ought to pray for, but the Spirit himself intercedes for us through wordless groans. And he who searches our hearts knows the mind of the Spirit, because the Spirit intercedes for God’s people in accordance with the will of God.

And we know that in all things God works for the good of those who love him, who have been called according to his purpose.  For those God foreknew he also predestined to be conformed to the image of his Son, that he might be the firstborn among many brothers and sisters.  And those he predestined, he also called; those he called, he also justified; those he justified, he also glorified.

We live in a fallen world but long for a perfect one. Even creation has been groaning since the fall of man.  Why would we think otherwise?  The reality is that LIFE IS A STRUGGLE.

When a significant challenge suddenly arises in our life, have you ever asked yourself WHY?  The contrarian question is this: do we ask ourselves the same WHY question when something GREAT occurs in our life?  Our bodies groan inwardly (and sometimes outwardly) because they long for redemption….redemption in light of eternity.

Despite chronic fatigue….even with a new kidney, Irene takes on each day with disciplined rigor….consuming plenty of pro-acceptance (….or, anti-rejection) meds.  She may be running errands, shopping, gardening, addressing tasks around the house, investing time with Vincent (7 year old grandson), or attending a friend’s wedding, she’s “taking no prisoners” as she methodically and courageously confronts each day.  After all, the 24/7 nausea that plagued her for 7 years is GONE; the accompanying 3 day a week dialysis: HISTORY.  The Primary Amyloidosis remains: in REMISSION.  By 3 pm she transitions to a resting time which lasts through the evening and she looks back on the earlier part of the day with joy because she’s lived life to the fullest……despite its limitations and groans.

Anyone who sees her can hardly believe she’s had or still has any physical or health challenge….…at all.  Her signature smile is apparent to all who see and know her.

Irene is turning 7 years old on June 15, 2014….celebrating her 7th STEM CELL TRANSPLANT “birthday”…..what a ride it’s been and still is…..thanks to UCSF and all praise to God for His miraculous intervention and sustenance.

In light of eternity, Irene is living beyond the groans and considers “that our present sufferings are not worth comparing with the glory that will be revealed in us.”

Leave a reply Click here to cancel the reply 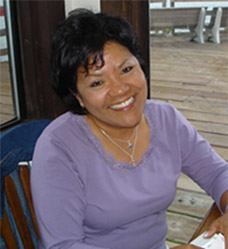 “Because of the Lord's great love we are not consumed, for his compassions never fail. They are new every morning; great is your faithfulness.” -Lamentations 3:22-23